Permanent Pump is a Major Deal

On behalf of Councillor McFadden, I had the opportunity earlier this week to visit the construction site at the Cactus Gate parkette where the permanent pump and trench dewatering system is being installed. The sheer magnitude of the project became very evident. The wet well is at least 10 metres deep with a diameter of more than 2 metres at the opening. Despite the pouring rain during my visit, there must have been a dozen construction workers on site working hard to ensure the project is done properly and on time. This is more than simply a super-sized sump pump… this is a project of significant size and scale. And well it should be as it represents a sizable investment by the city and significant protection for the community.

Part of the construction involved the complete closure of the intersection and sidewalks at Cactus Gate and Black Walnut Trail. The detour route is via Gumwood Road. Please avoid driving and walking in the area if possible. The project’s expected completion date is July 31, weather depending. 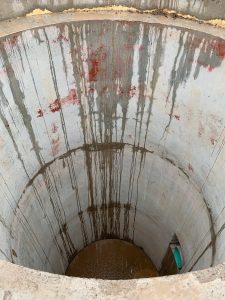 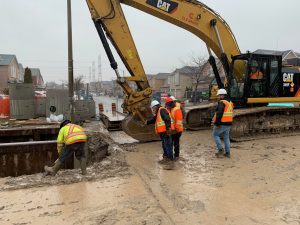 The City has concluded its investigation of one of its contractors, following allegations that one of the contractor’s employees working the High Water Protocol allowed a pump to run out of gas during the rainstorm during the early morning hours of January 12. The investigation, led by senior management staff in the Transportation & Works department, included interviews with city staff in the field, staff from the contractor, and the residents who reported the incident. In the end, there was insufficient evidence to substantiate the allegations.

The investigation confirmed that at least one of the two pumps deployed at the location in question was activated and operational throughout the rain event. The investigation also provided the opportunity for the City to review its expectations of its contractor and reinforce those expectations in writing, as well as clarify its own monitoring practices. The City considers the regular review and evaluation of its contractors as part of its core responsibilities to ensure the work undertaken is done properly and to the acceptable standards as outlined within each contract.